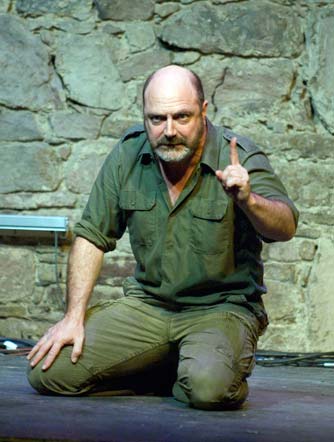 In late 2007, my general manager James Seabright introduced me to the actor Cameron Stewart with a challenging proposition: to create a solo performance based upon the war diaries of the actor's grandfather.

The diaries had already been published online as an ebook, attracting the attention of Radio 4's Today programme, where Cameron was sympathetically grilled by John Humphreys and also read extracts from the diaries. James Seabright was listening and immediately had the idea of suggesting to Cameron that the book would make an excellent show. Having made contact and finding Cameron receptive, James suggested me as his collaborator.

The idea was to make a show in which Cameron could re-create key scenes from the diaries but also speak as himself, making personal reflections from a modern perspective and giving his unique insights into the man who wrote this extraordinary document.

I think of myself very much as an actor and writer but have dabbled in directing and creating material for other performers, notably with actress Linda Marlowe on her 2003 show No Fear! (I wrote and directed her 'between the scenes' chats and a scene called The Lost Keys, as well as coming up with the title) and Janet Street-Porter's 2003 show All The Rage! (which I structured, directed and titled - a fascinating if thankless task).

On My Grandfather's Great War, the process involved weeks of meetings and rehearsals with Cameron who was candid, uncompromising and committed throughout. Having talked in detail about the diaries and about Cameron's own life and his feelings about his grandfather, I spent many deeply engrossing hours filleting the manuscript for telling and stageable episodes, finally putting it all together into what has proved to be a visceral, highly emotional performance piece of which I am immensely proud.

I remember promising Cameron when we started the project that, by the time we were done, he would have a show that would be 'the best work you have ever done'. I am pleased to say that we achieved just that - though I would add to my promise only the words, '..so far.'